Instrument in the box to be mounted in front of the panel.
LCD 5.2" TOUCH SCREEN Display.
Front protection rating IP65.
The COBRA 365 not only integrates weight and speed variables to generate the instantaneous flow rate per hour and the total weight, but also performs the function of automatic flow rate regulator.

Maintaining of the flow rate SET POINT through PID control of the analogue output, with an alarm output for flow rate out of tolerance;
Continuous transmission of the instantaneous flow rate detected by the analogue output proportional to it.
Ability to set, for batching, the preset, set and flight values with pulse outputs upon reaching the values. Possibility of setting the SET POINT via analogue input, and having extra analogue output for effective flow rate transmission in addition to the standard regulation output.
Calculation of the weight total of dosed material with transmission by impulse output and possibility to deliver to a 24-column printer via RS232 port.
Programming of up to 15 different set points of work, settable via BCD inputs.
Freezing of the analogue output value by means of logic input, in order to present it again on restart and avoid the initial pendulation of the system (which runs all 15 set points).
Ability to display, during operation, I/O status, the current weight, current speed, the encoder pulses and the correction factor set.
Procedures for the zero setting with moving belt and calibration with material loaded with consequent factor correction.
It can be connected with PC / PLC using communication protocols ASCII, Modbus-RTU, Profibus and Profinet IO (optional). 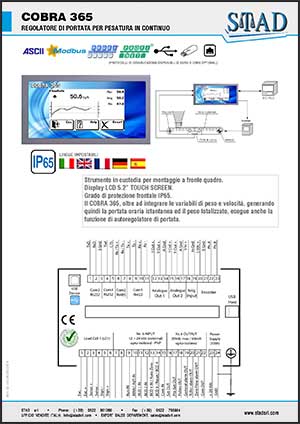